Posted by American Friends of RAMBAM in General, News 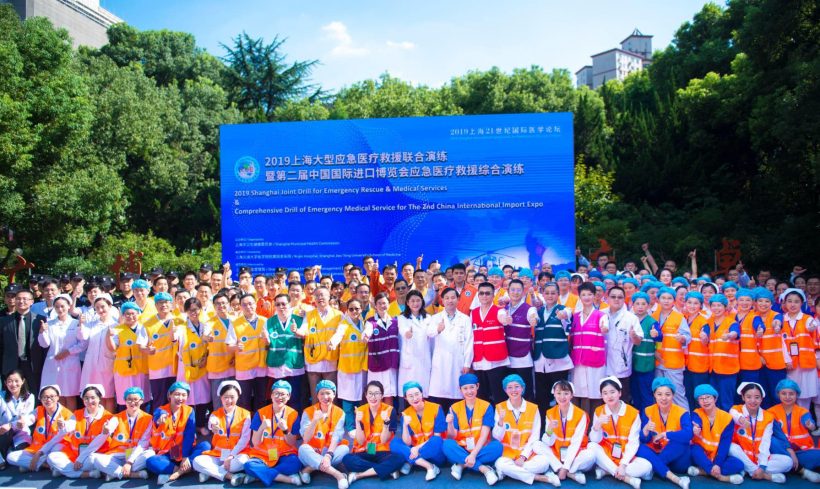 A trauma drill concluded a three-phase training project undertaken by Rambam at the request of Shanghai’s Ruijin Hospital. The training also included lectures about medical innovation and research.

A delegation from Rambam Health Care Campus recently traveled to Shanghai, China, to participate in the third and final phase of a joint cooperation training project on the subject of trauma care at the city’s Ruijin Hospital. The project was initiated by Professor Chen Erzhen, a Chinese graduate of Rambam’s trauma management training program. Making the four-day trip to Shanghai were Rambam Director and CEO Dr. Michael Halberthal, Director of Nursing Gila Hyams, Director of Trauma and Emergency Surgery Dr. Hany Bahouth, and 2004 Nobel Prize Laureate Professor Aaron Ciechanover.

In the first phase of the project, Halberthal, Hyams, and Bahouth participated in a seminar in Shanghai titled “2019 China-Israel Seminar for Emergency Medical Rescue”. During the second phase, a delegation of around 30 doctors and nurses from Ruijin came to Rambam for a two-week trauma training session that included making preparations for the third phase – a mass casualty trauma drill. Explains Hyams, “We selected the Chinese team members and brought them to Rambam from Ruijin Hospital. While here, they participated in a two-week course, during which we planned the drill with them.”

The 2019 Shanghai International Symposium for Medicine in the 21st Century was held on Day 1, in cooperation with Rambam. Two Nobel Prize Laureates, one arriving especially for the symposium, were the keynote speakers: Norwegian Edvard I. Moser, recipient of the 2014 Nobel Prize in Physiology or Medicine in 2014, and Ciechanover. Speaking to a captive audience, Moser spoke about his role in the discovery of the brains “GPS” cells and what is needed to achieve innovation, followed by Ciechanover, who focused on the atmosphere needed to promote academia and research – and how Israel became the start-up nation. Other speakers included Halberthal, speaking about innovation at Rambam and how it is integrated into work processes and several Chinese delegates.

On Day 2, members of the Rambam delegation gave a variety of trauma-related lectures, after which, the Ruijin Hospital attendees participated in a large-scale mass casualty trauma drill. The scenario involved receiving 50 patients injured in a boat fire. “The hospital prepared in a very impressive manner, with each department primed in accordance with the rules learned during their training at Rambam,” notes Hyams, adding that “they [the Ruijin participants] were just as effective as we were due to their exceptional levels of discipline.”

The deputy mayor of Shanghai and the heads of the city’s various emergency services came to observe the drill, which received major media coverage from the local Chinese news outlets. Also in attendance were representatives from the Embassy of Israel in China, who were impressed with Rambam’s contribution and indicated a willingness to involve the hospital in future activities in China.

“We were pleased to have this opportunity to work with and train our counterparts at Ruijin Hospital. Unfortunately, Rambam has a great deal of trauma experience, but we believe it is important to draw on that experience in order to share our knowledge with others, providing information and tools that can help other institutions improve their efficiency and response in emergency situations,” states Halberthal.

At the end of the visit, the Chinese representatives asked the Rambam delegation to create a branch of Rambam’s trauma training program in Shanghai. “They very much want to continue the collaboration with us, and were quite appreciative of our participation in the project,” says Hyams.

In the photo: Chinese participants in the mass casualty drill.

In three designated drawers under a bed in the patient reception room in the Meri and Sol J. Barer Pediatrics B Department in Ruth...

A ceremony marking the opening of IDF-run COVID-19 Departments in the Sammy Ofer Fortified Underground Emergency Hospital was held...